Vietnam's Ministry of Agriculture and Rural Development reports that the export value of wood and wood products has reached $6.6 billion in the first five months of this year - a whopping 61.3% increase vs. last year. Nearly 85% of the total value of Vietnam's wood and wood products exports is shipped to just four countries: the U.S., China, Japan, and South Korea. 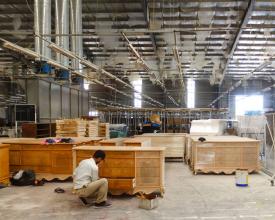 The guitar-making industry prizes rare woods from old-growth trees for their acoustic properties. But, using this wood has meant entanglements in scandals over illegal logging, resource scarcity, and conflicts with new regulations that restrict the trade of endangered species of trees. Many rare woods come from areas with legacies of environmental conflict, colonial violence, and dispossession.

A new NAHB study shows that regulations imposed by the government across all levels now account for $93,870 of the final price of a new single-family home. $41,330 is due to the higher price for the finished lot, based on regulations imposed during the development of the lot. $52,540 is the regulatory cost imposed on the builder during construction.

Lumber firms support the U.S. Department of Commerce's plan to double tariff rates on most Canadian softwood timber. That plan has angered home builders. While the new rates vary by company, expect overall increases from 9% to 18.32%.

See the DHA coronavirus news and resources pages for more stories and updates.

The California Assembly has passed legislation requiring that all state procurement contracts protect boreal forests - covering Canada, Alaska, and U.S. border states and tropical forests - as well as fundamental Indigenous rights "to safeguard the world's most indispensable natural allies in the fight against climate change."

"Fire season 2021 is looking grim," said California's only wildfire research center on Twitter. The researchers' concern is the low level of fuel-moisture content, the statistic that measures the ratio of moisture to flammable material in plants, trees, and shrubs. Last year's wildfire season broke records: there were 9,639 fires across the state, burning nearly 4.4 million acres over 4% of the state's area. In addition to the swaths of destruction, state residents suffered from poor air quality and rolling power cuts.

Trees are one of the most powerful ways to offset the carbon that will continue to be released by the use of fossil fuels and from certain industries. Forestry experts say the existing supply of seedlings, particularly hardwood seedlings, is falling short of what is needed to meet ambitious climate change goals.

Canadian researchers expect to see more zombie fires as the climate warms and winters shorten. The existence of zombie fires - underground fires that continue to burn throughout the winter - was once thought to be a myth. Now, experts believe that these fires are likely to become more common.

The Reforestation Hub, launched earlier this year, provides a comprehensive look at the potential to reforest the contiguous U.S., focusing on what is most cost-effective and feasible. The tool enables users to identify reforestation opportunities across the country and to create strategies for ramping up forest restoration.

This year's deadline to submit a request for funding to the Hardwood Forestry Fund is Thursday, July 15. HFF supports sustainable forestry by providing grants for tree planting, direct seeding, natural regeneration, forest management, and hardwood research on public lands. Thanks to the generous support of members, HFF has helped plant more than 4 million trees over the past three decades.

Published
May 21, 2021
Source
Insight Crime
In Chile, Convoys Of Stolen Wood Are Common

Authorities in Arauco, Chile seized a convoy of trucks with massive amounts of stolen timber: illegally harvested pine worth an estimated $10.5 million. The frequency of seizures of illegal wood shows just how common it is for timber traffickers to steal wood from legal plantations in the heart of Chile's logging industry.

Illegal logging in the rainforests on Sulawesi Island surged by 70% last year, according to a local NGO. Forestry authorities were forced to reduce monitoring and enforcement activities due to COVID-19.

Nippon Paper is focusing on new breakthroughs in cellulose nanofibers. The company intends to build cellulose nanofiber-based supercapacitors with vastly improved performance - and less environmental impact - than the batteries currently used in cars and smartphones.

Which species of tree is the nickname for two different U.S. presidents? Bonus: Name both presidents.

DHA eNews - U.S. Importers Drive Up The Price Of European Wood Products, Too